Ironically, something that gathers attention here almost more than the plants we grow here in Maine, is rock tripe. It graces several spots along our WildWalkWays trails. WHAT IS ROCK TRIPE? 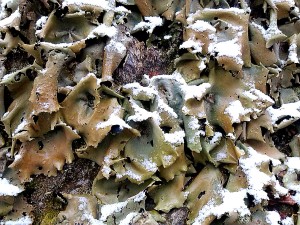 Rock tripe is the common name for various lichens of the genus Umbilicaria that grow on rocks. A lichen is a symbiotic relationship of a fungus and algae. Rock tripe can be found throughout northern parts of North America such as New England and the Rocky Mountains, generally in pristine environments. They are edible when properly prepared and have been used as a food source in extreme cases when other food sources were unavailable, as by early American northern explorers.

There are many species of rock tripe around the world. The species that graces our granite ledges Umbilicaria mammulata, the smooth rock tripe. Probably the most common rock tripe in the northeast, it can reach diameters upwards of 15 inches – this is a lichen of some significance.

Let’s start our investigation of smooth rock tripe with a look at the name. According to most sources, the English name “rock tripe” comes to us via France, where it is called tripe de roche, literally “rock guts.”  “Tripe” is the word used to describe the tissue from the stomach of a ruminant animal (a cow, for example), which is used for food (mmmmm). This does not bode well for the edibility of this lichen. 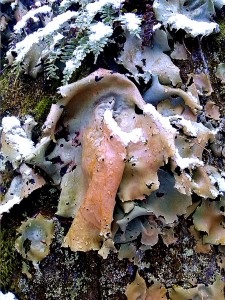 Yet, it turns out that rock tripe is indeed edible. Of course, the palatability no doubt depends on the species in question. For example, in many Asian countries, rock tripe is considered a delicacy and is much sought by connoisseurs. On the other hand, the Inuit consider rock tripe to be a starvation food, eaten only as a last resort. The Cree, however, ate rock tripe as a regular part of the diet, often using it as a thickener for fish broth. Each of these peoples is eating a different species, which one should keep in mind if one is deciding to give rock tripe a try. 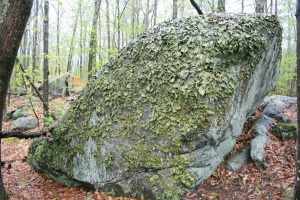 Reading through the history of the use of this lichen, the description of the Inuit’s rock tripe best fits smooth rock tripe – a starvation food that you’ve got to be pretty desperate to eat. George Washington’s men filled their bellies with it at Valley Forge in the winter of ’77 – they lived, but didn’t thrive. This could be in part because the lichen can act as a purgative. Or it could be because it’s not terribly nutritious – it will fill you up, but your body won’t get much from it.

Eating rock tripe is not something to be undertaken lightly. For one thing, it is full of bitter compounds and therefore must be soaked and boiled in several washes of water to render it edible. What is often left is this rather slimy mass. Good for thickening broths. It can be roasted, or fried. Personally, I think I’d have to be pretty darn hungry to give it a try. 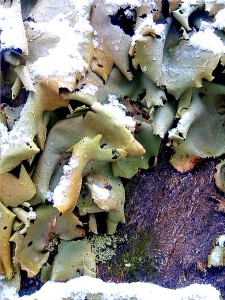 Let’s revisit the name once more, this time looking at the genus, Umbilicaria. If it looks familiar, it should – think of umbilical cord. See the similarity? Both are derived from the Latin word umbilicus, which means navel – the point at which the umbilical cord attaches. If one takes a close look at rock tripe, one sees that it has a navel, too – right about at its center. It is from this navel that the lichen attaches itself to its rocky home.

Our rock tripe colony changes at various times throughout the year, because as the weather changes, so does this lichen. When times are good and there is plenty of moisture, the lichen is soft and pliable, like a piece of good leather. In times of drought, it becomes quite brittle, shriveling up a bit and prone to damage. When it’s in this brittle state, it is somewhat less impressive to the casual visitor, but even so, it is worth checking out.

If you are checking it out on our granite rocks, please do not pull it off the rock ..IT HAS TAKEN DECADES TO GROW. Anyone seen doing that will be ex communicated, from our place. Once you know what it looks like, you can head out and look for rock tripe on the rocks on your own. And if you decide to sample it, stop on in and let me know what you thought – starvation food or culinary delight. 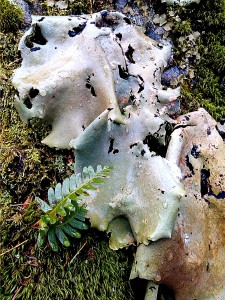 Eastern Plant and WildWalkWays …more than a nursery!

To order plants just email your wish list of plants; we will get back to you easternplant@juno.com