We have successfully transplanted and moved hundreds of large mature plants over the years, never losing one. If your property has plants that are valuable but would be better moved, contact us. We do go out of state if warranted.

Below is a photo time line example of digging, moving and transplanting a gigantic, 16 foot rhododendron. It had been ripped out of the ground by a windstorm, here in Georgetown, Maine during November 2014.  A new customer contacted me in distress “can you save my rhodo?” After taking a look, I informed the client we could “finish” digging the rhodo, move it and replant it.

Here is the toppled rhodo on the ground. It was uprooted on the back and right side, yet still “attached” in the ground. The weather was damp and wet so the root ball was not in danger of drying out. As you can see, it was originally planted too close to the house, not giving it room to grow. While that was bad, it had the fortunate effect of limiting the root growth on one side where it met the house. Rhodos are shallow rooted with wide, spreading roots. When we move them, we dig a wide, pancake type rootball. I suggested to the client after digging the rhodo, it be moved out a few feet to give it a bit more room. The soil it was in was typical stony/sandy/loam which is perfect for rhodos.

I carefully went around the root zone area determining where most of the roots were before any digging was done. Luckily the root ball was still intact and not cracked to any large degree. Here is Ted carefully checking the root ball and going under it removing embedded rocks. At this point we have severed the root ball about 80& around. You can see how the root ball is right up against the foundation.

The root ball is now severed. We have gently and carefully scraped the bottom of the root ball to remove more rocks embedded and loose soil to reduce the weight. Without a tractor*, lifting such a root ball is nearly impossible. (*when possible they can be used)

You can see these are not the typical dimensions of a rootball often seen, that would have been narrower but deeper. Had this root ball been dug that way, too many of the roots would have been destroyed and the rhodo would not have survived. There are no roots below 8 inches or so on a rhodo. 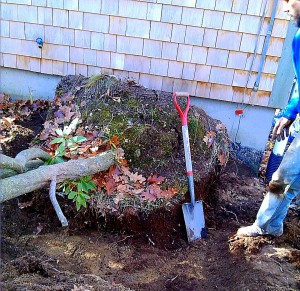 While no pic of the event, we now use a truck to gently pull the severed root ball forward. Two of us will be lifting the main trunks slightly so they are off the ground as the truck pulls. Didn’t get a pic but success ..we pulled the ball forward 18 inches with zero damage.  Now on to uprighting the rhododendron, slowly in stages.

We had the boards shown ready as supports. With three of us, we got the rhodo up to 45 degrees … not viisible but there is a rope from the main trunks that is anchored out of view toward the back, so it can’t drop down. The towels are against the trunk to prevent scraping the bark. The boards are supporting the front. This plant weighed probably 700-900 pounds.

Same progress point with a different view. While ideally we would have wanted to move the rhodo out even further, there were logistics that prevented that but you can see it’s now out 18 inches from the foundation, where before it was flush against it. So far no damage and everything is going smoothly. That large stake on bottom right will be one of 2, used as anchors for the rope supporting the rhodo (you can see the temporary rope now loosened)

The rhodo is now at almost 80 degrees upright. Ted has carefully begun to fill in with soil below the root ball, since as we lift the front of the rhodo, the root ball now has air pockets. NOTE: no soil has been filled in around the edges yet.

Ted now begins to fill in the expanded planting bed with soil. The soil is only loosely filled in ad NOT compacted or walked on. Rhodos need loose, airy soil. Pressing in too hard, walking on the rootball and packing in the soil now would hurt the rhodo. So it is just gently firmed in by hand. The soil we brought in was just native soil, like that the rhodo had grown in. The HUGE MISTAKE most make, including most landscapers, is trying to add “better” soil with peat, compost, manure etc. That’s all wrong. If the rhodo was in native soil and doing fine, just add more of that. See the article on this blog about soil. 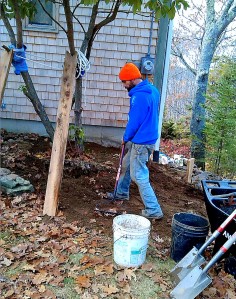 SUCCESS! After finishing the soil fill, the rhodo was mulched with oak leaves…the best mulch for them, then watered in. The rope stakes in back will remain for a year. The wooden board stakes will remain thru winter as a safeguard. Client, below, was more than happy. A thirty to fifty year old rhodo successfully saved and moved. I want to thank Ted for his dedicated help on this job and the client as well: his extra hands were needed for the uprighting!

AND A DESTINATION POINT TO OUR WILDWALKWAYS TRAILS

WE HAVE SOURCES FOR PLANTS FEW OTHER FIRMS HAVE